I always have so much fun transforming these old uniforms into a usable tribute using the Service Members uniform and the chosen fabrics of the one honoring them.  I hope you enjoy a peek at a few more of the bags I have created!!  Thanks for stopping by to look :D


Thank you for stopping by to look at my creations!!  I still have more projects that I have not listed, so stay tuned!!  If you are interested in having one of these bags created you can contact me at cabrewer89@hotmail.com or you can check out my facebook page https://www.facebook.com/AmyBStitched and private message me there.

Be Blessed!!
Amy B
Posted by Amy B Stitched at 6:37 AM No comments: Links to this post

About two years ago I was approached by a co-worker asking if I would be willing to take one of her husbands old USAF flight suits and transform it into a tote bag for her.  She showed me some pictures of ones she had seen on-line and I told her that I would  take some of MY old uniforms and see what I could come up with. Below is my first attempt. 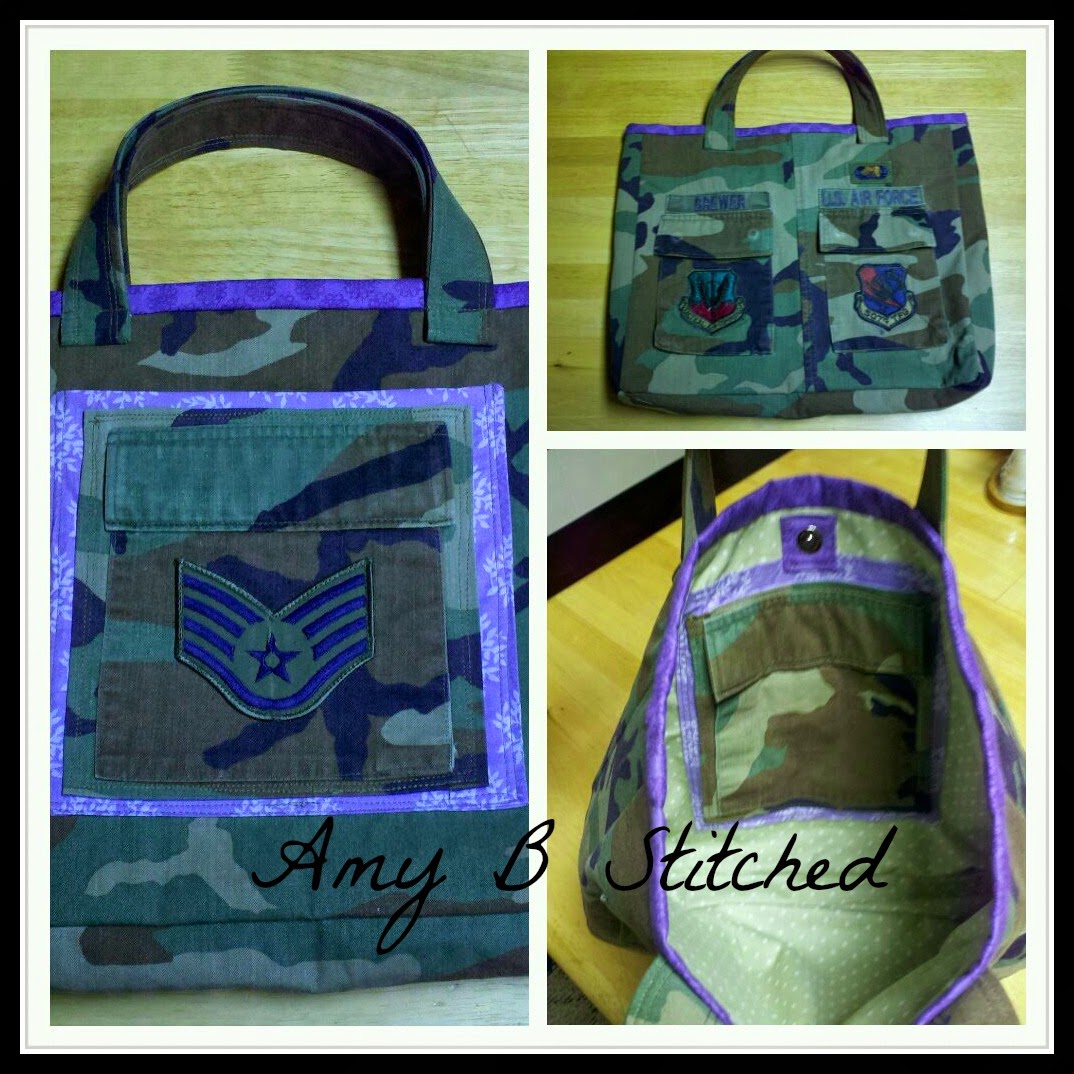 The straps ended up being a bit short, so I took the button tabs off of the cuffs and lengthened the straps just enough so that I could wear the tote over my shoulder. There were only two tabs on this shirt, the pic below shows what I came up with using the button cuffs and a couple of D-rings. 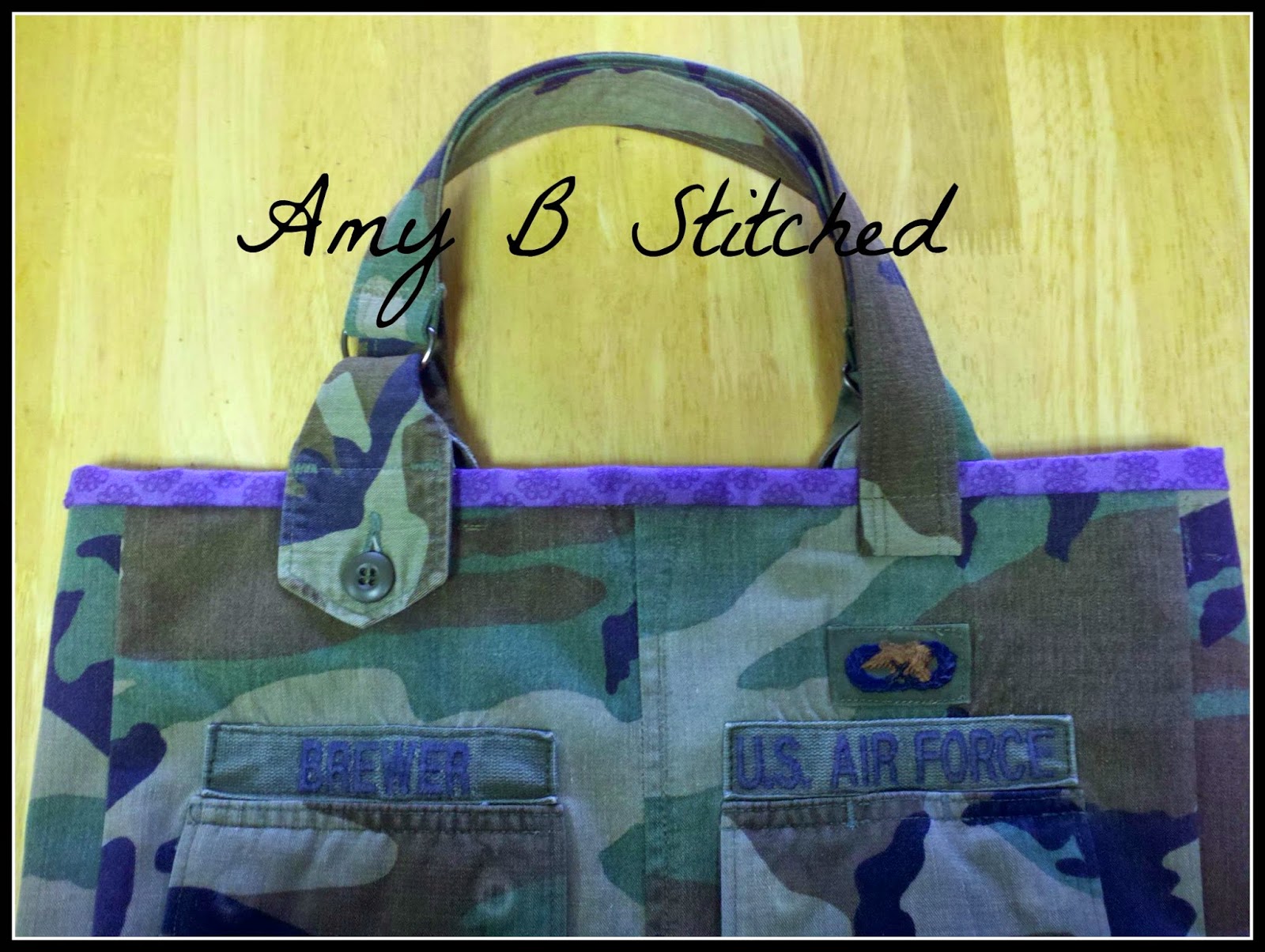 While I was waiting for said woman to find the PERFECT fabric for her tote, I made ANOTHER tote using the patches from my former USAF Reserve Unit to select the fabric.  This was (and continues to be) my favorite bag to carry!! 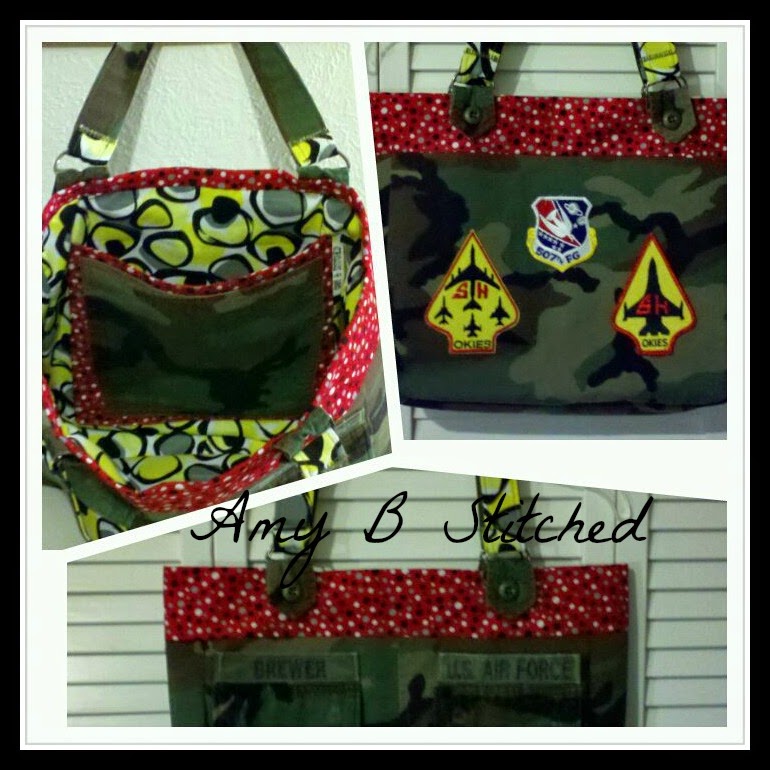 Before I knew it, the special fabric was selected and I had begun work dissecting the first flight suit.  I must say I was pretty pleased with the outcome!! 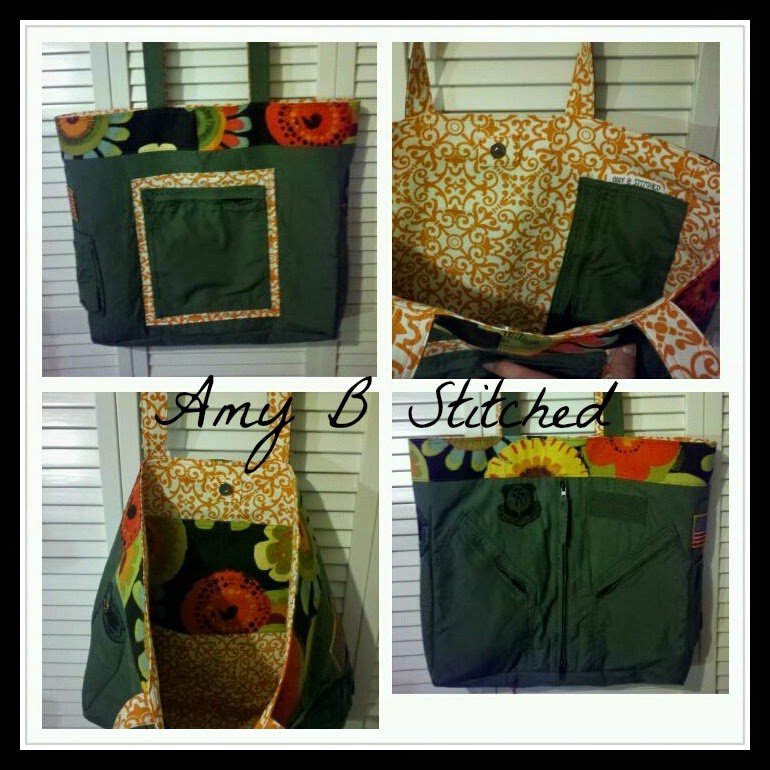 Easter was upon us and the owner of the flight suit tote asked if I could use this pattern she had found to make her daughter a small purse to match her tote for an Easter Purse.  Of course, I said YES!!!  It turned out ADORABLE!!! 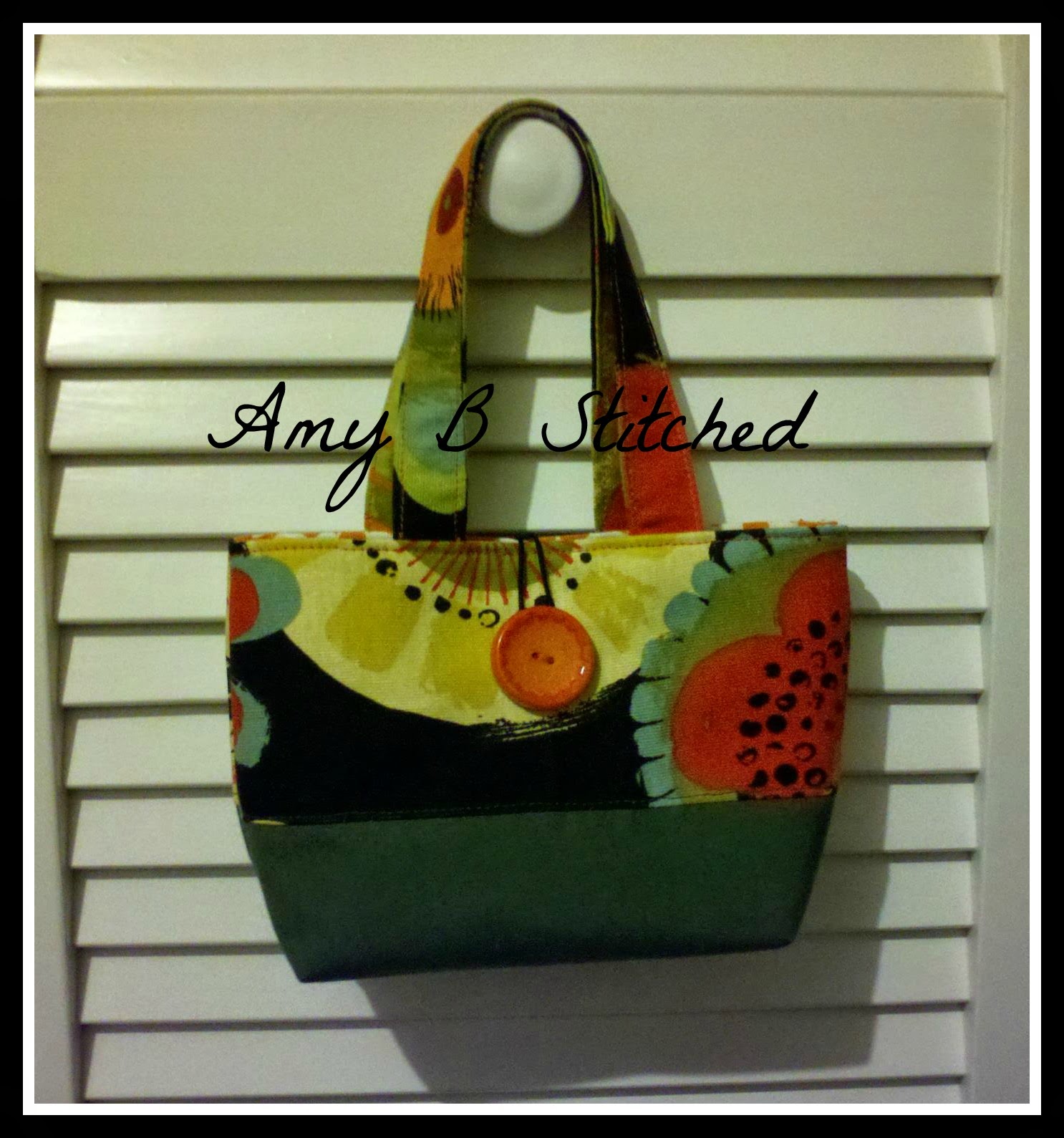 This idea started a little bit of a trend...... 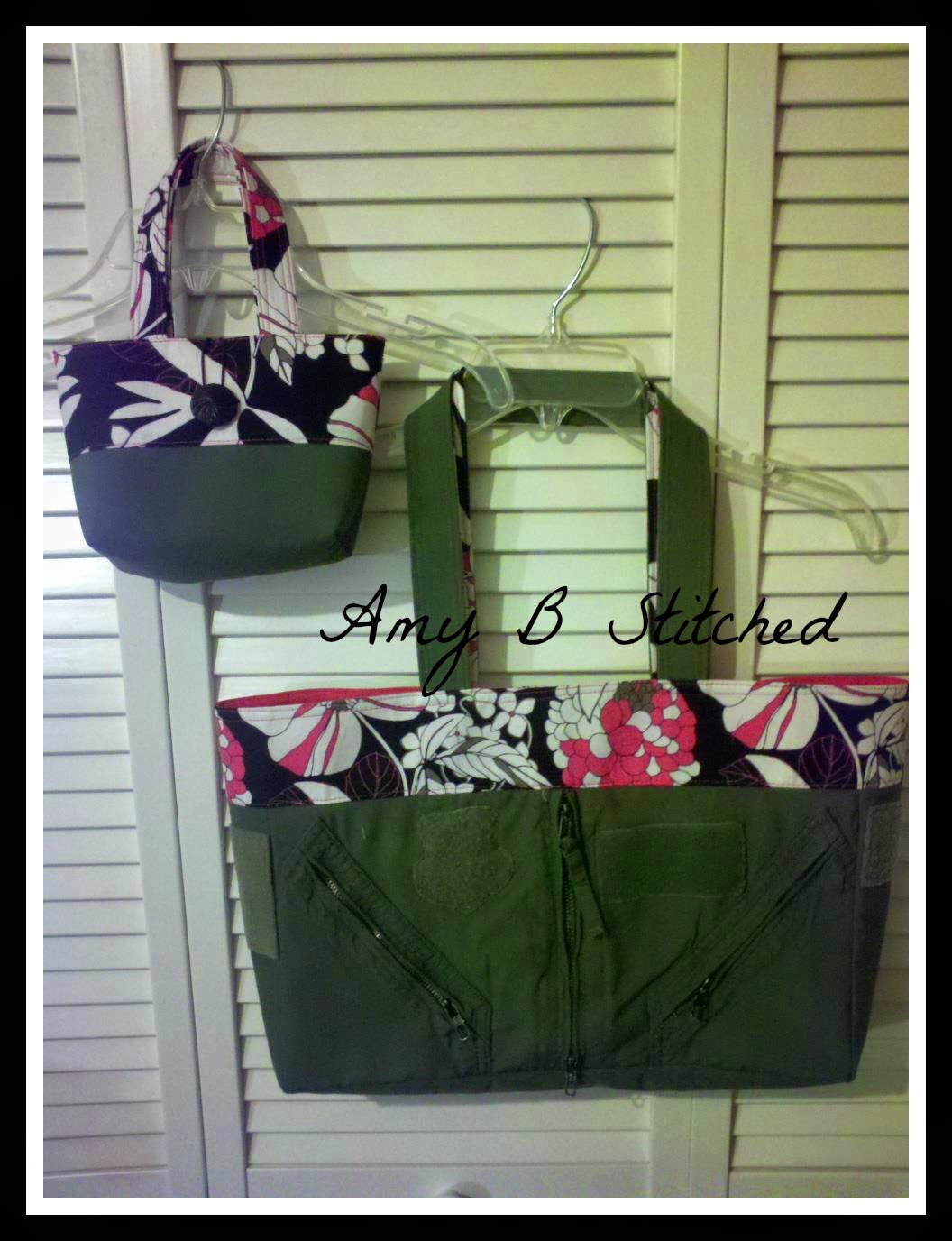 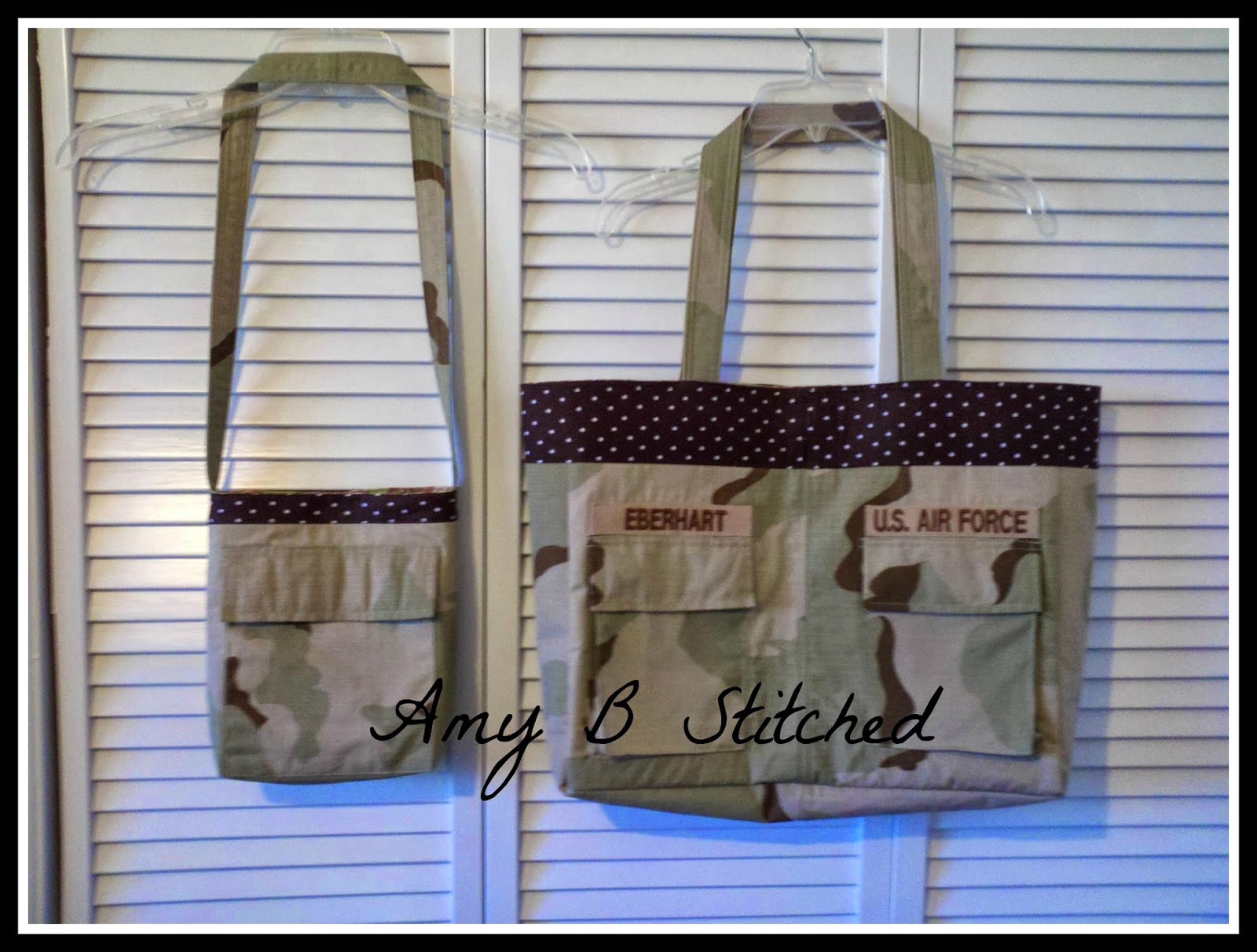 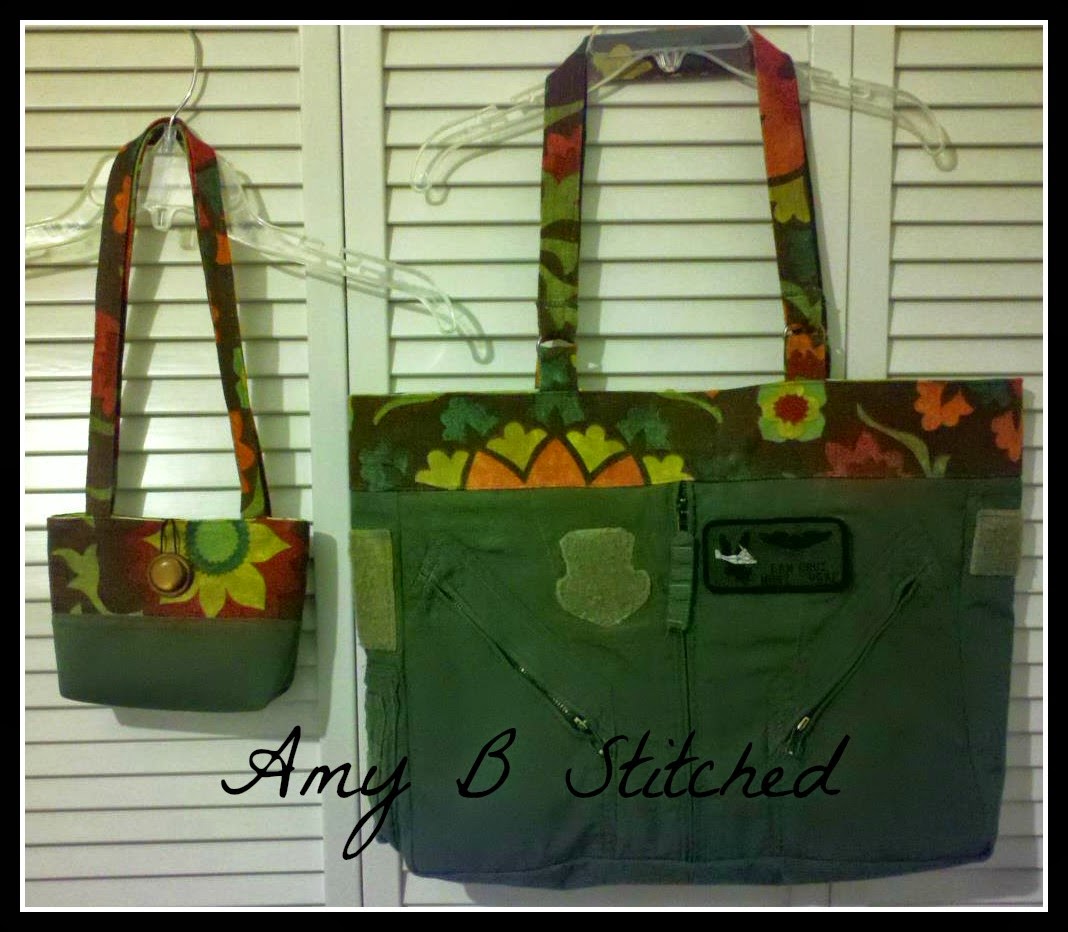 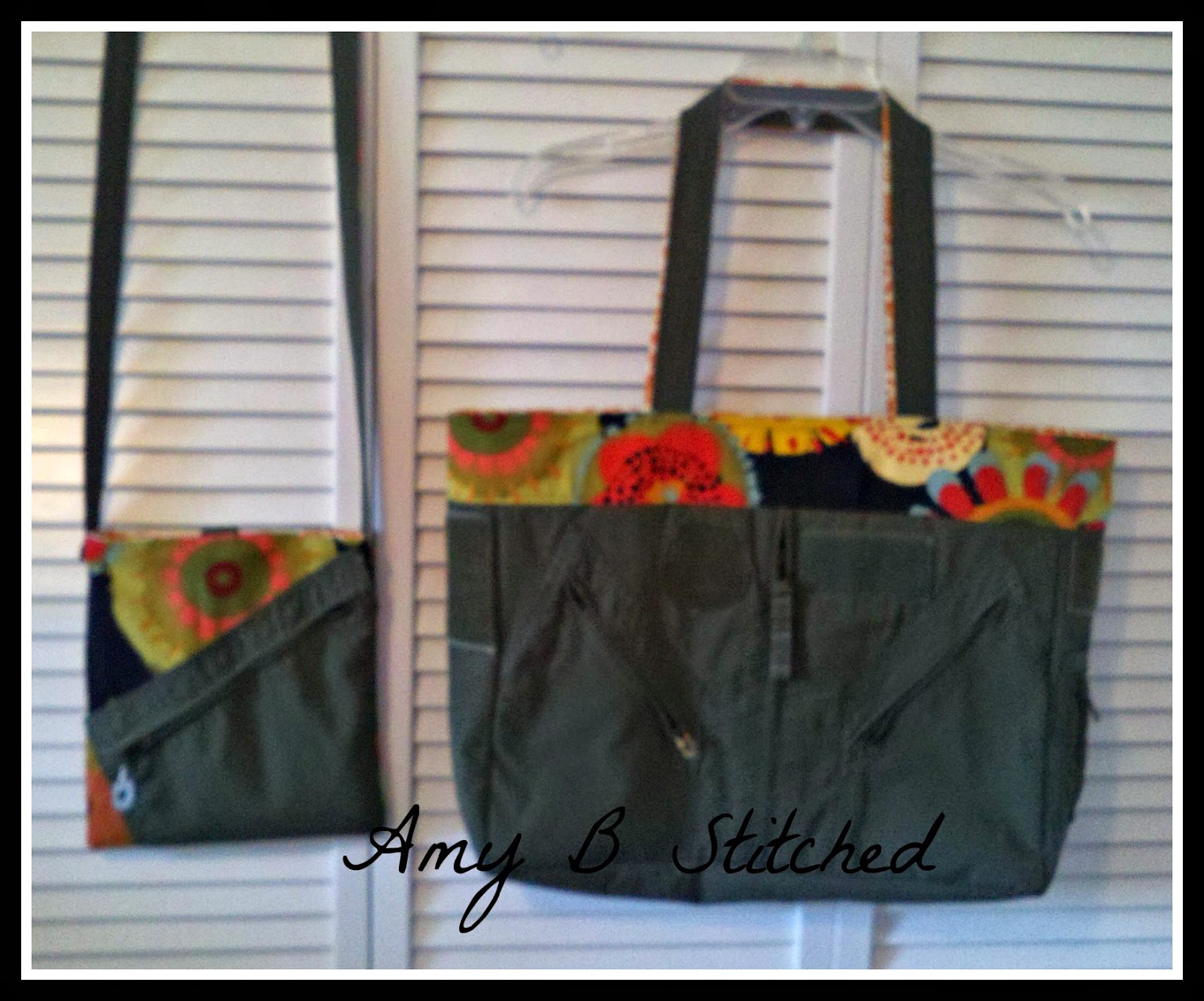 Many more totes and purses have been made since these....but FAR too many to highlight in just one blog post. So Stay TUNED for the next update for the Military Uniform Recycle Projects!!!

Be Blessed!!
Amy B
Posted by Amy B Stitched at 1:52 PM No comments: Links to this post 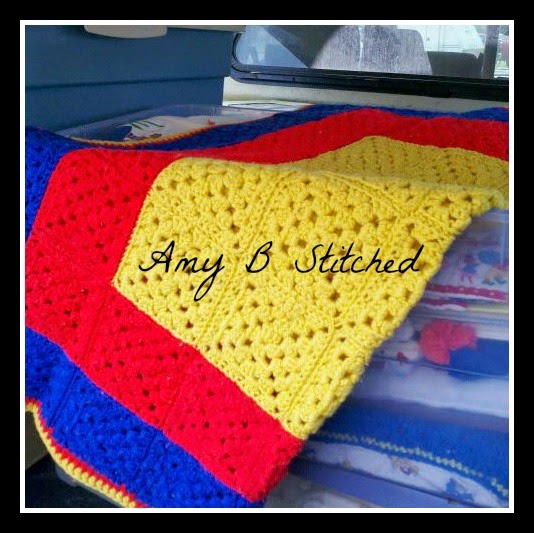 I was going through pictures tonight and came across this picture of the first blanket I made when I was pregnant with my first child.  That was more than 24 years ago!!  I had learned to make the Granny Square as a teenager and had the pattern memorized.  So in my spare time I chose this simple pattern that had been ingrained in my memory for many years.

Last summer as we were packing up the house and putting everything into storage I came across the box that contained this first "hole blanket" as CL affectionately called it.  He also has a matching pillow that you may (or may not) be able to see in the box the blanket is draped over.

Below is a pattern for the Basic Granny Square so you can learn to make your own. And check out my blog entry here as I went through my "stash busting" project, using up spare yarn and making different afghans using the Granny Square.

Be Blessed!!
Amy B
Posted by Amy B Stitched at 11:06 PM No comments: Links to this post

Several years ago I had the idea to turn my backyard garden VERTICAL!!  We had wonderful weather that year and I had a bumper crop of ALMOST EVERYTHING that I had planted!! And because my mind is always at work on things stitched, I figured out a way to grow my sugar-pumpkins vertically on tee-pees, making crocheted "hammocks" for them to rest in as they got heavier.


Click here to get a pdf version of the pattern which includes the symbol pattern as well as the written one.


SUGAR PUMPKIN HAMMOCK for your garden


Finish off at end of row 10. No need to weave in ends.  Cut three 24 inch pieces of cotton yarn.  Tie one to each corner of the pumpkin hammock. These are used for tying your hammock to the tee-pee. 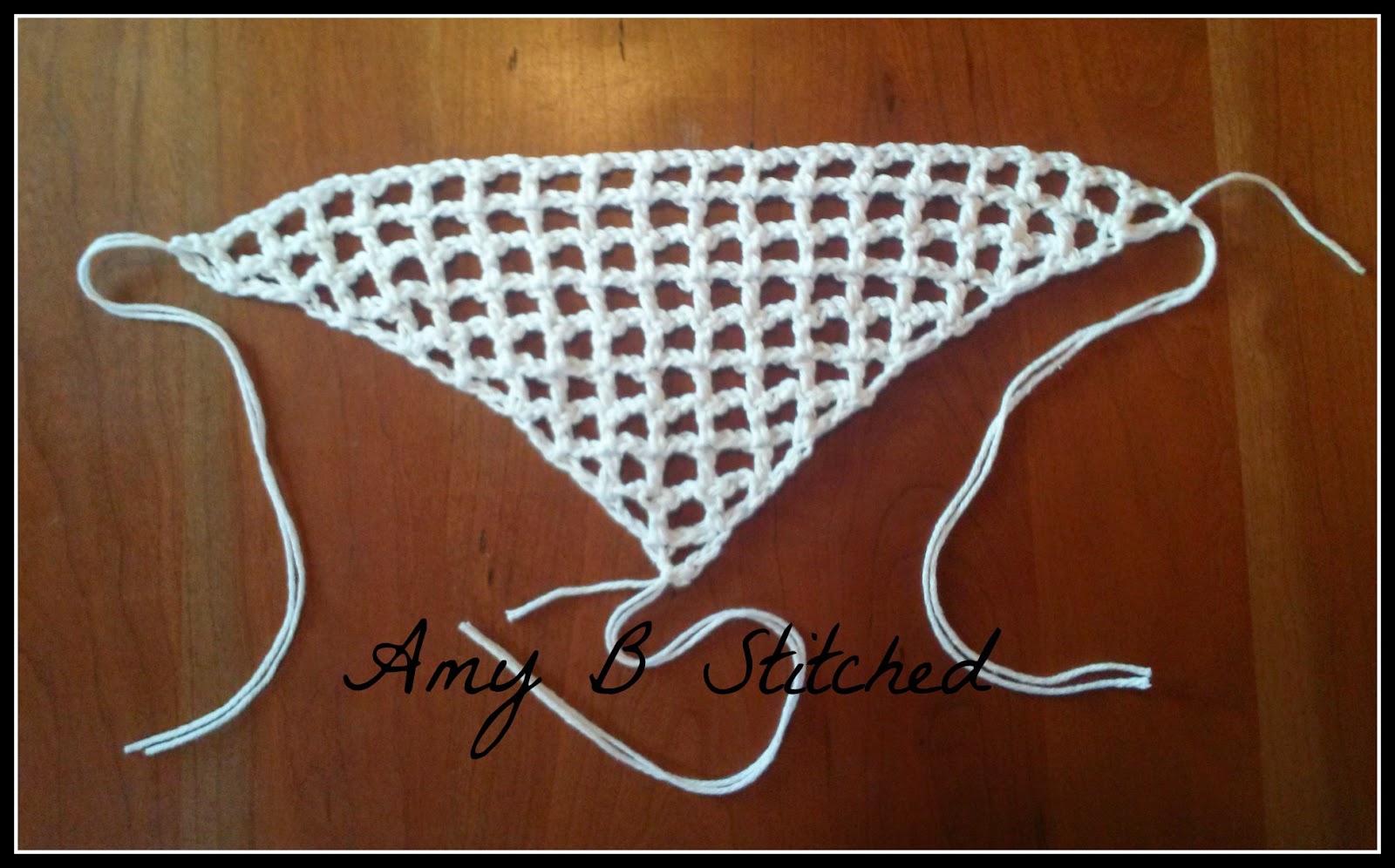 Be Blessed!!
Amy B
Posted by Amy B Stitched at 7:35 AM No comments: Links to this post 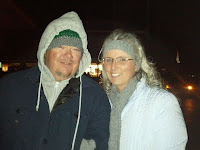 Me and My Honey at the Christmas Light Parade 2010